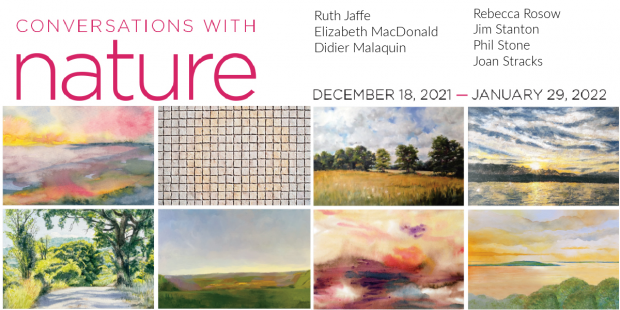 Opening Day only. No reception.

“The world of reality has its limits; the world of imagination is boundless. It is in man’s heart that the life of nature’s spectacle exists; to see it, one must feel it.” — Jean-Jacques Rousseau

“Conversations with Nature”, a heartfelt exhibit, presents conversations with nature, explorations of its many forms and dialects. A diverse range of visual vocabulary provides the viewer with a wide selection of perspectives. Nature may be quieting for the winter season, but here, it will be alive and on display in vivid and imaginative renderings of its many facets.

Dr. Ruth Jaffe is a neuroscientist/psychoanalyst whose research & teaching focused primarily on the mechanisms of visual perception. Ruth joined a plein air painting class of the Washington Art Association 20 years ago and has ever since pursued her life-long interest in art. She considers her painting as a dialogue between the external world (the objective physical scene) & the internal world (the subjective, emotional experience) of the person, at that moment in time & space. Ruth has had several solo shows since 2003 & participated in numerous group shows in NYC, CT & California.

Elizabeth MacDonald, a resident of Bridgewater since 1970, utilizes clay as her primary medium. As her material of choice, MacDonald has crafted complex, rhythmic clay pieces that can be described as part architectural, part sculptural, and part painting. Through layering, she highlights texture in her works that have been displayed in both public and private settings. Her pieces have been featured in hotels, medical centers, large corporations, and private homes. In Connecticut, you can find some of her work in the chapel of New Milford Hospital, in the DEP Headquarters in Hartford, and in Wilbur Cross High School in New Haven.

Didier Malaquin is a landscape painter. He has studied at the Art Students League in New York City and at the Washington Art Association, in Washington CT. A native of Paris, France, he lives and works in Roxbury, CT, and Nant, France. His watercolors and oils have been exhibited in various group shows at the Art Students League, the Washington Art Association, and the Burnham Library, and in a 2021 solo show at the Minor Memorial Library.

Rebecca Rosow divides her time between Woodbury, CT and New York City. She has been painting for 30 years; solo show at Good News Cafe in 2001; active career in commissioned portraits through 2011; in recent years, she is painting more for herself, enjoying the landscape, and trying to get to the essential.

Jim Stanton is a designer and artist in New York City and Roxbury. He is an honors graduate of the University of Cincinnati’s College of Design, Architecture, Art, and Planning and studied painting at the Art Students League. His watercolors and oils have been exhibited in various group shows at Washington Art Association, Minor Memorial Library and solo shows at the Roxbury Senior Center and the Gunn Memorial Library.

Phil Stone lives and paints at his home in rural and bucolic Roxbury, Connecticut. His lifelong career was as a furniture and decorative product designer.  He has received numerous awards in home furnishings and has held various patents. Phil works in a multiple of mediums: Graphite, ink, watercolor, and oil on canvas. He holds a Bachelor of Science degree in Design from the Philadelphia College of Art. And has studied for years in the New York Botanical Gardens Illustration Program.

Joan Stracks is a Fine Arts graduate of New York’s Hunter College, was awarded an MS in Social Work, and is a Registered Certified Equine Therapist. She taught art in New York and Massachusetts, has exhibited at many galleries, and in many communities throughout Connecticut. Captivated by the beauty of nature, she depicts her personal encounter in a “conversation”, capturing nature’s spellbinding allure.